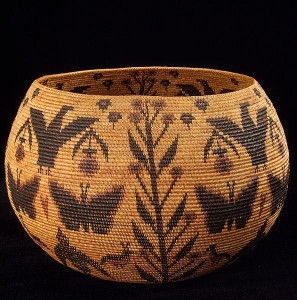 Native American art history has developed over thousands of years and consists of several distinctive styles from the distinguishing cultures of diverse Indian tribes. From Navajo to Hopi to Plains Indians each tribe has a unique history, which consists of many types of Native American Indian arts including beadwork, jewelry, weaving, basketry, pottery, carvings, kachinas, masks, totem poles, drums, flutes, pipes, dolls and more.

Native American arts have an extremely deep connection with spirituality and Mother Nature. It’s a profoundly expressive art that has been a way of life for many Native Americans. Native American art history can be traced back to cave painting, stonework and earthenware thousands of years ago. Over the years the types of materials used by Native Americans has evolved from rocks and feathers to cloth, clay, turquoise, silver, glass and fabric; each piece of art reveals intricacies of the diverse indigenous people.

Southwest Indian artists are best known for kachina dolls of the Hopi; sandpaintings of the Navajo; pottery, particularly by Pueblo Indian artists; woven blankets and rugs predominantly by the Navajos; and many different styles of fine basketry and jewelry particularly in silver and turquoise jewelry.