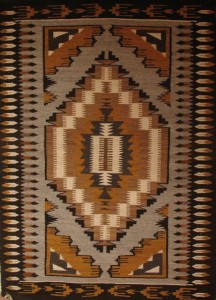 Native American art history has evolved from cave paintings to intricate weavings, designs, shapes and materials. Kachinas, tribal jewelry, pottery, basketry and even tattoos are mainstream forms of artwork that continue to develop. Artists from Georgia O’Keeffe to Logan Maxwell Hagege have fallen in love and been influenced by the west and Native American art. Native American artist Shonto Begay intertwines modern methods with his Navajo background to create a narrative moment in time.

Native American arts metalwork was fairly rudimentary before colonization. The metal was hammered or etched using copper, shaping pieces into pendants, earrings, necklaces or beads. In the 1800’s silversmithing was introduced into the Native American jewelry and the Navajo, Hopi and Pueblo Indian artists quickly adopted distinctive patterns and styles. The squash blossom necklace, Hopi silver overlay bracelets and Navajo turquoise inlay rings were some of the unique designs created with combination of the new techniques with traditional designs.

Native American weaving is rich in history and popularity. According to legend, Spider Woman was first to weave her web of the universe and taught Din’eh (Navajo) to create beauty in their own life teaching balance within the mind, body, and soul. After weaving the universe, Spider Woman taught the gift of weaving to the Navajo. To this day, Navajo rugs are some of the most coveted weavings in the world.